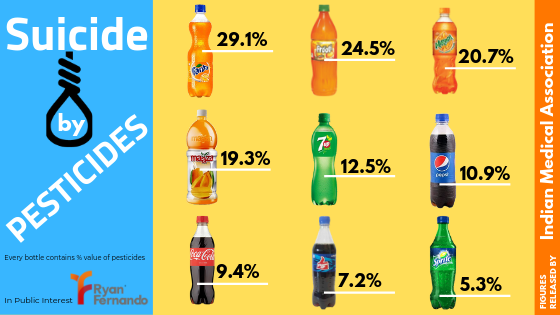 The Centre for Science and Environment(CSE) has released some ALARMING figures on the amount of PESTICIDES in the SOFT DRINKS. They are shockingly high.

CSE carried out the tests on 57 samples of 11 soft drink brands. The sample were collected from 25 separate manufacturing units of Pepsico and Coca Cola spreading across 12 states. As per the study on an average there were 3-5 different pesticides available in all the samples, 24x more  than the Bureau of Indian Standards (BIS) norms.

Lindane, a pesticide that can cause cancer, was found out to be 140 times times higher than BIS standards. Heptachlor, overshoot BIS standards by 4 times. What is more surprising is the fact that Heptachlor is actually banned in India. Some samples contained 200 times more of the Chlorpyrifos, neurotoxin,than the BIS standard. To put into perspective,  pesticide range higher than 2.1%, is very harmful to the liver and can cause cancer.

In 2003, the average level of pesticide residue in soft drinks were 34 times above the BIS standard, whereas now it is in range of 42-52 times above the BIS standard. The directions given by the Joint Parliamentary Committee for ensuring safety standards were not implemented because of opposition by the companies. So if you are waiting for the Government to set standards for ensuring your healthy living, it might prove to be a long wait. Chances are higher that you may even not be alive to see that change.

It is upto each individual to take charge of their health in their  own hands. Will you still consume soft drinks knowing how it affects our health? Will you allow your child to drink it?

You may not be earlier aware about adverse effect of soft drinks, but you probably are now. The choice lies with YOU.

We at QUA Nutrition are informing, educating and helping people discover the right foods and inculcate them in their routine to lead a healthy life. We are observing higher behavioral compliance among adults & children when they frequently interact with nutritionist & understand how food that they eat affects them. If you feel that we can be of any help to you, contact my team on 9743430000 or write to us at https://quanutrition.com/Contact.html .