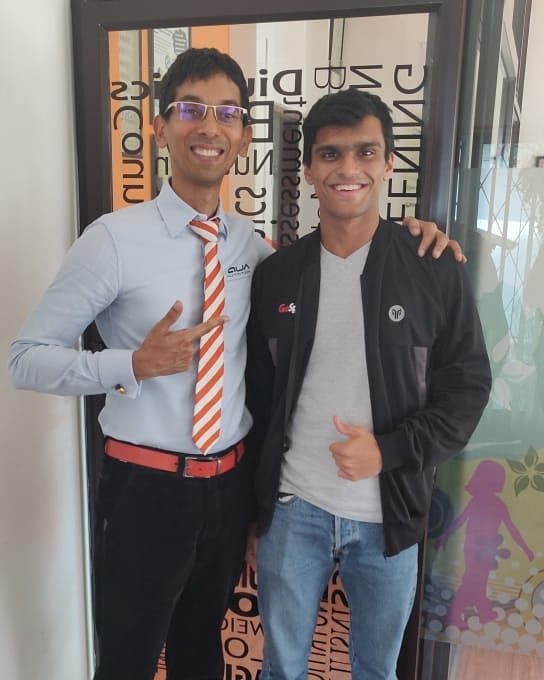 On 23rd February 2020, something completely unexpected happened in the form of a big international victory for my country and myself. I won the French Junior Open 2020 at Lille, France, and became the first Indian to win this prestigious championship in the U19 category.

The tournament champions history boasts of squash legends like Thierry Lincou, Gregory Gaultier, Tarek Momen and many more, and seeing my name engraved along with theirs on the prestigious U19 French Open rolling trophy was a huge honour for me. The end of February marked the beginning of what I never expected to see in my life.

After winning the tournament, I made it back home to Goa, India, where all my relatives and well wishers flew down to, and we celebrated my victory and had a good time. A week after returning from France, I was scheduled to leave for the United Kingdom for a 2-month training stint under Chris Ryder, a top level coach and former world number 30.

The aim was to train hard in the UK and rigorously prepare for the World Junior Championship which was to be held in Gold Coast, Australia in July. My plan was to train with Chris, play some club level league matches, and a few tournaments in and around the UK. 12-days into my training, the world faced a crisis in the form of an invisible killer. I was foam rolling after my squash session on the 20th of March, when I heard a club member yell that “it would be quite some time before we all saw the squash courts again”.

I didn’t understand what he meant, but that very evening Boris Johnson, Prime Minister of the UK, announced that the entire country would go into complete lockdown for 1 month. I was stunned! I had no clue what to do, and to make things worse, India shutdown its borders for international travelers. The world started experiencing a pandemic and everything had come to a sudden and complete halt.

I was thousands of miles away from my parents, in a country without many friends or relatives, and without any access to the facilities and the coaches under whom I had come to train. The panic amongst the public, naturally led to food shortage, which was my biggest concern. Never did I ever imagine that I would face such a crisis in my lifetime.

I didn’t know anything about the virus either, and neither did anyone else. I was completely lost and didn’t have any other option but to use video calling to contact my family and close friends. I remember 1 week into the lockdown, things felt weird because I wasn’t around a squash court anymore. My body felt weird cause I wasn’t doing any activities, I would spend time with Netflix instead of my squash racquet.

But, I knew I had to keep myself from going into the mode of being bored! Right around this time, my GoSports family came to the rescue. Within no time, they had started organising online classes and seminars with well known athletes, physiotherapists, psychologists, and many other experts. Things felt much better, and I was interacting with athletes who, just like me, were stuck in some other part of the world unable to participate in sport.

Due to those video meetings and workshops, I got to know many stories of other athletes which were truly inspiring to me. Being a part of the Stars of Tomorrow programme, I had the opportunity to virtually meet many athletes from different sports and learn from and with them in the workshops. And yes never ever did I enjoy Zoom meetings so much before!

I started giving time to things which I couldn’t during my squash training/season like gardening. I had a small garden in the house I was renting, and the landlord gave me permission to use that garden to get rid of weeds and plant some new seeds. All this while, I looked at gardening as a boring activity but all of a sudden it had become my best friend.

I was spending more time outdoors and less time on my mobile screen. To keep myself fit, I would try to stay inside the house and use the minimal equipment I had access to. I started practising meditation for some time and completely fell in love with it.

I turned to reading and read Andre Agassi’s autobiography, The Open. What a phenomenal book! Days were going by, and I still had no clue of how and when I would get back to my country. Things started escalating in the UK and at one time, the UK was the one of the worst affected countries by the coronavirus in the world. It was terrifying to see the death count rise day by day and I was trying my best to stay healthy.

In the meantime, there was a shortage of food, and I had to stand in queues for hours just to get food. I could only have two meals in a day instead of three, and it started to affect my body. I could feel that I was losing weight, and I had very less resources for food.

Most people bought the ready to cook food, and I was left to buy raw food.  This made me learn how to cook, and even though I was not good in the beginning, I started enjoying it.

I was given a modified diet plan by my nutritionist Ryan Fernando, from Qua Nutrition.

I tried my best to catch up with the plan and cook the right food as much as I could to ensure my body got the right nutrition.

After a three month long wait, on May 21st, after all the efforts by GoSports Foundation, my parents, and Shivanand Salgaocar (a family friend and the co-owner of Salgaokar FC), I finally managed to get a ticket on an Air India rescue flight to Mumbai. I was jumping with happiness and I was super happy to head back home to meet my family.

On the 23rd morning, I boarded my flight from Heathrow to Mumbai. After landing in Mumbai, the government had arranged for a bus that would take me to Goa. The worst part was that after reaching Goa, I had to quarantine myself in a hotel as per the government’s new rules and regulations to fight the virus.  After I walked out of the hotel wearing a mask, my parents could not identify me. I was shocked again! I was wondering if they had forgotten what their son looked like or if they were completely ignoring me, but in the end it was truly special to meet my parents after so long.

My eyes were full of tears of joy and I was delighted to be back home during these tough times. Someone had asked me how the pandemic could not affect my mental health when I was ‘stuck’ in the UK.  My answer was simple; my parents, my friends and GoSports Foundation were always there for me. They helped me with the right things at the right time. I would like to extend a warm, and a huge thank you to Deepthi ma’am, Nishieth and the entire GoSports Foundation family for supporting me through my toughest time. I wouldn’t have made it through without them.

The article is originally posted by GoSports foundation under The Sports Review September 2020 section. Follow go sports on facebook: https://www.facebook.com/GoSportsFoundation